There’s Just Something About Those Names

Neither is there salvation in any other: for there is no other name under heaven given among men, whereby we must be saved. (Acts 4:12)

Names in the Bible have meaning a purpose that God reveals.  Can you believe this is found in the book of Genesis Chapter five?  The Genealogy is from Adam to Noah.

Man (is) appointed mortal sorrow; (but) the Blessed God shall come down teaching (that) His death shall bring (the) despairing rest.

Credit for the above belongs to Chuck Missler who reveals the Bible is an integrated message system, the product of supernatural engineering. Every number, every place name, every detail every jot and tittle is there for our learning, our discovery, and our amazement. Truly, our God is an awesome God. ~Missler

Now if you have seen the post I did on Counterfeit Signs and Miracles the magician’s who are aided by demons you find their names embedded in the practitioner’s name. MI MONEDA which is an anagram for IM A DEMON.

God has graced us with an understanding for the last day’s names reveal things.

To sell out the GOP seat for the Whitehouse in 2008 was truly placing an Obamanation in that office.  Was this the transgression of Daniel 8:23  a false messiah to the Muslims? Obviously, that did not work out so well,  we know after losing 700 billion dollars the devil was in the details. His 1700 years of well-organized puppets bought him the Whitehouse.

“For we are opposed around the world by a monolithic and ruthless conspiracy that relies primarily on covert means for expanding its sphere of influence — on infiltration instead of invasion — on subversion instead of elections — on intimidation instead of free choice — on guerrillas by night instead of armies by day.  ~John F. Kennedy

In 2012 Two Catholic’s VP’s were toe to toe Biden and Ryan.  no unity, no harmony no will of God just a foot in the door to watch over their puppet President should he win.  Romney was really Rome’s hand again that’s why I refer to him as Romemoney.   I revealed that just before each election a box that symbolized Islam showed up four months before the election.

The vote for Romney was a slap in the face to the only true G-d of heaven and earth symbolizing we don’t care about the lost Mormon’s or who they think they are. Satan would have laughed loudly in G-d’s face had Romney won revealing how blind we truly all are to what is happening in the spirit realm. Look, Father, they would place another God over America,  let’s bring back the pledge and roll out the one nation under G-d pledge in a big way!

The Mormon Prophecy, in this case, had he won would have been true. There is nothing harder than convincing a religious follower their religion is based on a lie, and this group would have grown in number losing more souls.  Of course, none of Joseph Smith’s prophecies come to pass because he is a false prophet.

Not to mention the name Moroni is the prefix to Moronic it’s the “C” you don’t see.See?

Now we have a President taught by Jesuit’s who allowed his “Christian???” Daughter to convert to Judaism passing off his Son in law as the man of peace to Israel? That sounds like the real antichrist group to me.   This is the last “Trump” as for Mike Pence someone needs to tell him there is no such thing as an Evangelical Catholic. The priesthood ended at the Roman cross, Roman masters hijacked Christianity and turned it into the devil’s church fulfilling his prophecy to the angels he would make the Son of God his pet if he ever showed up. The priesthood did just that, ring a bell sit,  ring again stand, speak when we say this, good human now come get your treat.

The 49th most powerful man in Washington DC is said to be James Alefantis who owns a Pizza establishment??? How does a Pizza maker get that powerful in the Nations hub that sets the agenda for economic and political tones in the world? He is the Heidi Fleiss of children in our nation’s Capital. Before him was Boys Town and Lawrence King. He is a close friend of the Podesta brothers who have a fixation on the disturbed and depraved. Maybe we should start calling it Podestaphile?!? See the video below the warning.

When Obama called the movie “Spotlight” a work of fiction, he gave himself up as a supporter of the Vatican takeover of America. The movie made mention that lawyers like Hillary profited from creating gag orders on the victims to never disclose the payments or admission of guilt.

“It is a system which has conscripted vast human and material resources into the building of a tightly-knit, highly efficient machine that combines military, diplomatic, intelligence, economic, scientific and political operations. Its preparations are concealed not published. Its mistakes are buried, not headlined. Its dissenters are silenced, not praised. No expenditure is questioned, no rumor is printed, no secret is revealed”.~ John F. Kennedy

WARNING CONTAINS ADULT CONTENT AND THERE IS NOTHING ADULT ABOUT ANY OF IT!

The demons that live in these people want to eliminate true Christians who interfere with their lifestyle and choices.

They do not believe in the rapture of the church and that the RFID chip is not the mark of the beast because they do not see themselves as the woman and the beast.  They see it as a way to eliminate Protestant Christian’s who do not accept them as Christians.

My last name divinely was given to me through a Catholic Charities adoption originally I was born Eric Lewandowski.

Beaulieu which means beautiful place. If it wasn’t for them (Catholic’s)  I wouldn’t have found out what evil really is.  Come quickly LORD JESUS.

Abel means breath Matthew 23:35 Jesus Christ calls Abel righteous, and there aren’t many of those, not even in the Bible.  Abel died in filthy rags how could he be called righteous he was under the curse?  Somewhere,  sometime he will need to come under the blood and it only works here! Right brother Cain! It’s time we raised some Cain of our own.

The Roman Salute was a fist to the left chest and extend the arm in front of you Hitler style. 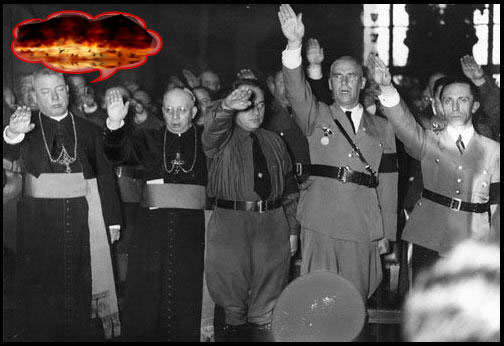 I’m thinking we bring back the old Roman salute only extend the hand fingers open and wave with a big smile on our face and say PRAISE JESUS!

Pray we rise up with joy to save the unwitting.