There is a reason chihuahuas are not good cattle dogs. 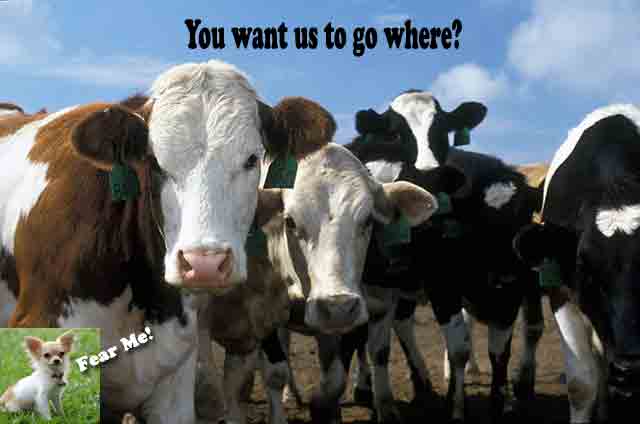 A dogs bark is there to warn us of the bite that is coming.  I desire that none perish, many of you have had your chance many have even tried to win others using compromise and adding sugar to the word. We are to love our enemies not join forces with them. The enemy of my enemy is not my friend if G-d is raising the others up to punish them,  for using HIS SON’S name in vain.  Especially when they dishonor G-d does G-d need to buy a Presidency for 700 billion dollars?

What G-d hated in the old testament he still will not let into the kingdom. No matter how much they try and candy coat it or call it holy and sacred.  What is sacred and holy to others may be the thing that offends G-d the most.

Only those washed in the precious blood of the lamb can enter into HIS presence.  No matter how many religions want to deny it, hell is real.  Made to keep Heaven,  Heaven.  Not designed to house man or meet his needs. None the less it is real.  Rejecting G-d’s Son in Heaven is how this all began. Saying HE unnecessary for a society to exist.   Lucifer / Satan was going to show us how his world would be better without the Son.  He and the others had no idea what he was carrying on the inside hearing and seeing it all.

The enemies mocking of us Christians goes back to how the angels mocked him and made him into the leader they preferred.  One who compromised and felt as the others did,  that the Son was not ever coming. That there was no punishment for denying the Son.  Now after 12000 years they are not as happy as they began.

Here we are at the end and is his new world order as he promised?  Is there any peace without Jesus?  Father covers me with treasure because of the treasure I carry and my love for the lost is as passionate and as close to HIS as you are going to find.   I wouldn’t have the call or have been awakened by him if not the case.   I am appalled that anyone would think otherwise.  I will not allow myself to be molded into that kind of leader.  All that wealth is going back into the church “That Loves HIM and HIM alone” to you Saints to bring in the harvest and alleviate much of the world’s suffering.

I desire to win as many souls as I can to Jesus before the enemy gets his turn. You should want to help me bring that kind of peace, not mock or correct what one does not understand.  WOOF, WOOF Want my call?  Then live my life first and still be in love with G-d as if it were the first day.

One of the reasons Jesus casts Satan into the bottomless pit for a thousand years HE is showing his followers a little mercy.  It is not the end of him. He comes back after the thousand years to see if any of us here,  now,  still want to join him.

My G-d is merciful while I hear others claim there is no plan to save us all right out of the pulpit from men who vowed to honor G-d and HIS word and most don’t even possess a copy. Those who do not are new world order ready to sell out their congregations while they laugh and mock at us who do own an actual version of the word of G-d.  Men who snicker at us,  the ones who rather spout truth over fables and lies. Even teach others to smile and nod their heads as we become confrontational about their Christmas deity who shares their heart with Jesus.  You may not like me. However, I know my G-d adores me.

If he does not love me,  then who will? We are here because of jealousy and strife and did any of us learn anything?