The reason I chose this time is because a certain Egyptian Pharaoh lived according to archeologists who study this period.  That this man was given credit for one of the worlds greatest undertakings.

If this time is correct which I believe it cannot be,  because it places him alive before the flood of Noah 2294 BC. Which I base on the following chart Old Testament Timeline.

Upon my conclusion, you should be laughing hysterically,  after all laughter is like a good medicine, and it is time to laugh at the enemy.

The object in question to this day remains one of the seven wonders of the world.  The Exodus takes place in 1496 BC, and Abraham is born 2001 BC… September 11th??? It is also the 1,949 years from the beginning of creation, which coincides with the 1949 AD of Israel becoming a nation.

In some pastor’s minds, this is called a coincidence or flawed theology. Facts mean nothing they like the mystery and leaving others in the dark. It keeps others coming back for more. That little shimmer of light is so beautiful not to mention the bobbles and trinkets they get from it.

John 8:54-58
(54) Jesus answered, If I honour myself, my honour is nothing: it is my Father that honoureth me; of whom ye say, that he is your G-d: (55) Yet ye have not known him; but I know him: and if I should say, I know him not, I shall be a liar like unto you: but I know him, and keep his saying.
(56) Your father Abraham rejoiced to see my day: and he saw it, and was glad.
(57) Then said the Jews unto him, Thou art not yet fifty years old, and hast thou seen Abraham?
(58) Jesus said unto them, Verily, verily, I say unto you, Before Abraham was, I am. 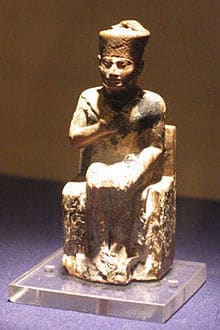 The only statue found of this king who lived 2589-2566 BC according to Archeologists of a worldly nature is an ivory statue measuring in at three inches high.

On a more personal note,  even back then men may have been trying to make up for their diminutive size, and with the lack of Ferrari’s around the next-best  thing was a pyramid, ego hasn’t changed much in over 4000 years. This is good to know because our enemy has too much of both. Ego and pride are also the two greatest flaws of man, and he takes advantage of them.

that the structure was under a great deal of water at one point. Stones on the lower sections have the remnants of sea life entombed and fossilized within them. Reminiscent of those found at the bottom of the ocean this would mean it existed as far back as Noah 2294 BC.

This means that Khufu could not have been its builder but the picture below is all they go on as confirming that it was he. The effort placed by the world to deny G-d becomes futile because it is the truth that calls the man he chooses to rise up to bring about his judgment.  It means someone needs a body in order to reign as G-d on earth and this is how he gets it.  It also reveals to the church Abel has returned.

That is why I say it is the first name it and claim it doctrine and proof that teachings like this may originate in hell.

The director of antiquities that I refer to as Howie Kazowie, who is actually named Zahi Hawass. Whose name may not be found in the lamb’s book of life, because  every time I see this famous egyptologist, he talks so highly of the ancient deities that have been proven as failures and will always be so.

Zahi swears that it was men who built it, and I am saying it was Goofy and his friends shortly after the fall. On Zahi’s website, you find only an artist’s rendering of the cartouche.  The image above was taken from a television special, and Zahi does not show the actual one because it draws attention to something he wants to avoid.

Kids in the days of ancient Egypt may not have had spray paint cans. However, it is within us all to make our mark on something.  Once Khufu did this it made it his by the “Order of the Sludge”  the very secret society behind building it. The supreme council was made up of Goofy, Daffy and Donald.

According to the crop circles and G-d hanging so near to me in these last days, I’m going with Goofy and friends.

Now let’s talk G-d doing the one-upmanship so that we can see this invisible war between both parties.

Thutmose IV (sometimes read as Thutmosis or Tuthmosis IV and meaning Thoth bore him) was the 8th Pharaoh of the 18th dynasty of Egypt, who ruled in approximately the 14th century BC. His prenomen or royal name, Menkheperure, means “Established in forms is Re.” ~ Wikipedia

Thutmose IV was born to Amenhotep II and Tiaa but was not actually the crown prince and Amenhotep II’s chosen successor to the throne. Some scholars speculate that Thutmose ousted his older brother in order to usurp power and then commissioned the Dream Stele in order to justify his unexpected kingship.

Thutmose’s most celebrated accomplishment was the restoration of the Sphinx at Giza and subsequent commission of the Dream Stele.

According to Thutmose’s account on the Dream Stele, while the young prince was out on a hunting trip, he stopped to rest under the head of the Sphinx, which was buried up to the neck in sand. He soon fell asleep and had a dream in which the Sphinx told him that if he cleared away the sand and restored it he would become the next Pharaoh. After completing the restoration of the Sphinx, he placed a carved stone tablet, now known as the Dream Stele, between the two paws of the Sphinx.

The restoration of the Sphinx, and the text of the Dream Stele would then be a piece of propaganda on Thutmose’s part, meant to bestow legitimacy upon his unexpected kingship.[2] Little is known about his brief ten-year rule. He suppressed a minor uprising in Nubia in his 8th year (attested in his Konosso stela) around 1393 BC and was referred to in a stela as the Conqueror of Syria, but little else has been pieced together about his military exploits. Betsy Bryan who penned a biography of Thutmose IV stresses that Thutmose IV’s Konosso stela appears to refer to a minor desert patrol action on the part of the king’s forces to protect certain gold-mine routes in Egypt’s Eastern Desert from occasional attacks by the Nubians.

Thutmose IV’s rule is significant because he was the New Kingdom pharaoh who established peaceful relations with Mitanni and married a Mitannian princess to seal this new alliance. Thutmose IV’s role in initiating contact with Egypt’s former rival, Mitanni, is documented by Amarna letter EA 29 composed decades later by Tushratta, a Mittanian king who ruled during the reign of Akhenaten, Thutmose IV’s grandson. Tushratta states to Akhenaten that:

Hebrew slaves were before Thutmose IV reign giving authenticity to the enemy trying to hide his fabulous work of building the symbols of the war that never really exists in the minds of the foolish the war between good and evil.

Had the Stella been placed there before he made slaves of G-d’s chosen people it possibly could  have sent the enemy in another direction. G-d waited to highlight His symbol and America proves it so.

An excellent read and some interesting facts can be found here on the time leading up to them becoming slaves Israelites in Egypt.

The Exodus takes place 1496 BC, which is 95 years before Thutmose’s IV reign during his rule, he unites under his reign both upper and lower Egypt. They are allusions to heaven and hell.

So what does that say about the sphinx being buried under the sand during the time of slaves?  Say’s to me, someone was hiding something.

The discovery wins the game for the angels as they see that someone cared enough to find the truth and place the effigy of the Son where he belongs just as America placed him.

The following chart is a timelines converted to give us a better  idea of the differing time states. http://www.matthewmcgee.org/ottimlin it may be off a little in some areas.  The point is the Sphinx was insignificant to the Egyptians for over 400 years and to the one who tried to hide it.

Proving that G-d’s word says and holds true your sin will find you out. That no one who commits sin may enter  heaven, especially mockers of the Holy.

Year 2239, when Jacob was age 130, Gen.47:9, his 40-year-old son Joseph, who had been governor over Egypt 10 years, brought the 70 members of his family together in Egypt because he had
been over the seven years of plenty to store up enough to see the land through the seven years of famine.

Jesus has 3.5 years to finish his harvest and guess who he is driving?  If he honors himself, his honor is nothing it is His Father who honors him. Father wishes to honor me for seeing and revealing to the angels that I know where the Son belongs, and it is never in anyone’s shadow.

You have not because you ask not, and when you ask, you ask amiss. I asked G-d for after I received the in filling of His Holy Spirit for all the gifts I learned about that evening at home study.  He then asked me “Is that all?” I asked,  “Why is there more?” He laughed and repeated, “Is there more!” I said, “Give me whatever I need to bring in your harvest.”  He said, “DONE!”  It looks like I’m GODZILLA!

He tagged me it in 2009 after my realizing what was taking place and that we now have symbols to join under. My side stands for the “Lion of the Tribe of Judah” while the Pope and Obama’s side is the blockheads or to make it nicer the Pyramid gang where no one at the bottom is getting anything.

As the Antichrist I’m OK with it,  my last name divinely given means beautiful place, I am in the transportation industry driving for of all companies one called “Land Air Express” fifteen years ago I moved into Spacetown USA where Alan the good Shepherd is from,  I came with my only Son.

Adopted my initials are five in all with the first being last Babel five has followed me everywhere on the five dollar bill the same name appears Abe L. someone who set many free.  The volume of the book is written of me. That is the Bible is here to show me how to tear down the enemies kingdom.  In England a town exists that has my last name and many of the crop circles while housing a transportation museum that has 007’s car.  I am thinking of naming the Protestant intelligent agency  F.U.C.I.A.  Freedom Under Christ’s Infinite Atonement or the shorthand Fucia like the royal color.