Pandemic or Tactic? You be the Judge?

America land of the free and the home of the brave it is called that for a reason many of our soldiers perished in wars began by the wicked who have taken our shores covertly and destroyed our freedoms so that their continued existence is not challenged. I for one would like to challenge it.   Jesus set the record straight when HE said it was finished. He ended the priesthood that HE alone ordained to offer up sacrifices and with HiS own sacrifice. He no longer needed such a system, someone else did. God had given us the cornerstone and all successful societies like our America followed HIS example.

The question is does free will end here and are we automatons on the other side?   If America were heaven and of course it is not, however, no one can deny it was pretty close to it in its heyday I was sure glad to have grown up here it was a gift to do so.  Who brought in hell to our lands and not just America’s but everywhere they tread? The teachings of Christ are wholly ignored by a system that claims to serve HIM.

They have seduced many leaders and many peoples to serve the Anti-God agenda and compromise leads to surrendering values that God has asked us to uphold. They never bend, never sway like legs of Iron they never kneel to the word of God.

The following Image is pretty much what I have been trying to warn people about but no one wants to listen. This is just America they got them all over the globe by Sorceries we have been deceived. Do you have any idea the billions of souls they have committed to hell?

The Constellation Virgo gives them away the heavens declare the glory of God. I will not bore you with the wilderness tabernacle again and where God / Christ placed Virgo but we do not need to have full knowledge of the scriptures to see that Mary Queen of Peace is really Mary Queen of death. She hates America land of the free and the home of the brave.

No fireworks celebrations next year either for America. Because America,  no longer belongs to American’s they are just laughing at us. Letting us believe we have some essence of power. No polls to cast your vote they decide the outcome it’s a dog and pony show. 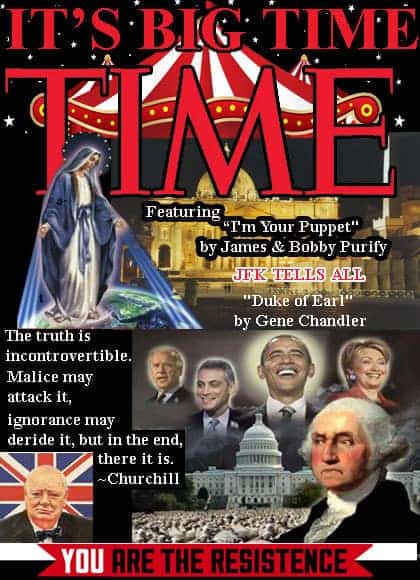 Are you ready to listen to me yet or do we let China take over as they plan?

Let’s not forget the ones who attended Parochial School pretty much every Nazi officer whose parents loved them sent them to their schools. They did it again here in America but it was they who destroyed our education system.

This post comes at the conclusion of the redesign of my ShineonJesus.com site and the last and final Link2One.com this has been a shameless plug for both of them.

Don’t you wish the word of God could go viral and the people of the world could know the truth?  Am I the only Christian who wants that for the world?