G-d is Keeping HIS Promises

The enemy wanted to rule as G-d, G-d promised him seven years. Nowhere does it say we need to prevent it. It is in bringing it together for him we win.  There are harvest years, and there are famine years (Genesis 41:15-53).  In those passages you will count up 21 sevens the number of sevens found triune in a week 777 placed in seven days are 21 in total.
7 x 21 = Psalm 147:1-20 we are presently in the 21’st century.

Psalm 21:11 the New World order is intended to persecute the Christian believer the children of G-d. It had begun before man was created at the insistence the SON was not needed to be worshiped to have a society. Man was made in G-d’s image, and G-d’s image came to Bethlehem.  The enemy hates mankind for several reasons. First, we look like G-d, and we are his replacement built up as living stones.

We are the Royal Priesthood the Holy Nation the people of G-d.

G-d promised he could have seven years only the Son whom the enemy did not believe in could also have seven. For the enemy, in his deluded mind, it was a winning bet, he knew G-d gave one the desires of their heart. Keep in mind this was all before the making of man to which he agreed.  So G-d decided to split HIS Son’s seven years in two. A deal is a deal, and if the enemy wants his seven, he knows where to find Jesus’s other covering to finish HIS seven.  If the world needs peace to build his temple, then many know where to find me.  If you seek with all your heart, with all your mind,  and with all your soul to give Jesus HIS other half of the seven, it won’t be hard to complete the harvest I shall have a larger following and less to argue with.  Think

Think covering, think light, think fair and balanced. On earth,  as it was in heaven. Let’s make earth as it is in heaven to give the place the same charm and make him feel victorious. Lucifer will play G-d it just won’t be with the Christians that left in the rapture.  It will be with the new converts made in the tribulation, some bakers (pastors)  will also have their heads removed these will be the beheaded saints of Revelation.  They should have listened to the warning we will give them before we leave.

Hint: The apocalypse is framed by white horses one rides inside the other outside.  The devil would call me a dirt bag. Father would call me HIS Son.

We know a lot about G-d because of the word we have, we know wonderful things like how G-d seeks to give us the desires of our hearts.  That all his promises are yes and amen through HIS HOLY SPIRIT, HE has given us a foretaste of HIS divine nature and a glimpse into eternity.

HIS first light bearer Lucifer carried the lamps of G-d that he reveals to us in the inner court that shines on the Showbread seven lamps in all. Each lamp a characteristic of the personhood of G-d. These are called the seven spirits of G-d the center lamp the highest being the Son who is about to join us here in the earth.

We now have the same light in us; some seek to feed it more than others do.  It cannot be denied we know it’s there. We know G-d the Father gave us the Spirit of HIS SON. This same spirit is what Lucifer once carried.  He was as a chariot for truth and light he knew the word of G-d, but like us, he did not know everything.

He proclaimed G-d the Son was in him while others just laughed and asked him to make things out of thin air.  Hard to understand why he hates G-d or us who claim we carry G-d in us as well, how odd?

What he learned as light bearer is that G-d loves his creation immensely and this love translates into giving those who ask for bread,  bread. He gives us the desires of our hearts; HE is going out of HIS way to see to it that HIS Son is protected from the bad elements in heaven that seek to destroy HIS home. That’s what a covering does it protects you from the bad elements. Lucifer was once that covering.

This is where Lucifer starts thinking… It is the first time in heaven a different odor is smelled it’s rotten and full of decay.  He starts to call G-d a liar insisting HE could not give him his desire and make him G-d. To add to his delusional request, he starts insisting that there is no Son.  Saying if they follow him he will make them kings and leaders, however kings and leaders need people to rule over.  G-d could grant him his desire, but it could not be in heaven.

It would have to be on the earth and technology had to be developed to give him G-d-like powers he is not omnipresent, or omniscient.  In the meantime,  the Angels could learn what is good and what is evil.

In Jeremiah 4:22 is this the Son speaking to them or Father speaking of us? In the context it is the angels who are the sottish children he makes it clear three verses down in Jeremiah 4:25 there is no man.

Lucifer was promised to sit on G-d’s throne to declare himself G-d but only to those who do not know the real G-d the one who inherits it all, G-d the Son JESUS CHRIST.

When I found what was lying in Egypt Christ came to me and explained what needed to be done. Nearly thirty days later my supervisor whom I showed what I  had figured out became possessed for a brief moment.  I said we had 3.5 years left and 700 billion to bring in the harvest.  He got belligerent on me and demanded he get his seven years and that he would consume the money.  After the spirit had left my supervisor, he was dazed and confused like he had lost time. Mumbling he would take the money and build animal shelters.  Well,  he definitely won’t be getting it from me to do that.

If you love your pets like children and taking care of them is more important than your neighbor’s souls. Then maybe when your neighbor is tasked with either taking the mark to buy groceries and condemning his soul to the eternal lake of fire eating your dog to survive will be the better choice or even the cat.  So save your pet and introduce your neighbor to Jesus before we leave.

I am under the impression the dragon needs us to give him the peace plan.

This way the wicked who choose not to worship Jesus are punished by him because they do not understand they were made in G-d’s image and rejected their salvation.  He hates G-d. They chose not to believe in G-d, which of course does not make HIM less real.   Satan and the demons only use others to get him what he wants.  His time is seven years the years of famine the word of G-d will be no more in the land except through the 144,000 and what people can find in the abandoned homes of Christians.

These new converts will be hated by those we leave behind to suffer at the hands of Islam.  Missing the rapture was not a wise move on their part.  However,  isn’t G-d giving many the desires of their hearts as well?

We joke about the Zombie Apocalypse, but the Bible makes it clear we are all dead apart from Christ.  Life only begins when we receive HIM as our Lord and Savior. If the desire of your heart is to stay and kill the demons who will cling to their humans making it almost impossible for them to die 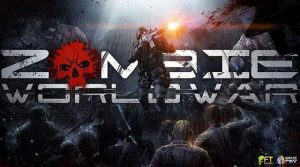 the person they possess feels all the pain it will never end even on the other side. Those who stayed for this make it obvious they do not love or care for G-d’s Son or care about the soul they are tormenting.

One of the crop circles is the beast up from the pit it that was is not and is again. Revelation 17:8 Cannibalism will be better than receiving the mark.  Militia’s left behind will kill those who take the mark in order to protect others. These people chose the wrong side so dispatching them to hell will save others. Like Jesus said it will be the worst of times.

To prove to the angels, you did not need the Son to have a society he was put on earth with his followers.  His society would exist without the SON of GOD at the core of it.  Because he plays dirty and does not play fair, he still has to use the Son’s name to accomplish building his society. This angers G-d as it uses HIS SON’s name in vain.  With it comes wars and violence nothing good comes from it all except for G-d’s original use of him keeping the bad elements out of the kingdom. The righteous rise to the top creation will have a picture of what is good and what is deemed evil and what will not have a place in heaven.

G-d does not send men to hell they chose it all on their own. all they had to do to escape it is what we all did inspect the sacrifice and see HIS mercy and love.

I know I do not have the faith to walk on water I spent a lot of my youth in a pool that my stepfather the carpenter built as our Heavenly Father looked down on me, I wonder what HE saw? Until recently I didn’t see it?  Unfortunately,  I do not have a mother to push me out of the nest as Jesus’s mother did for HIM, so I am waiting for other’s to figure it out. 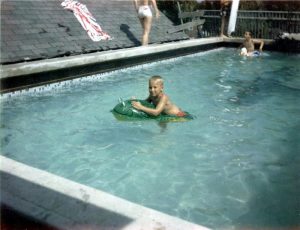 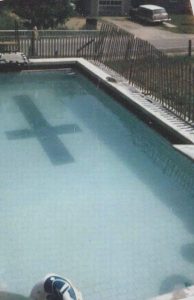